Seep card games have many similarities with casino games, and it is also known as Sip, Siv, Sweep, and Shiv. It is a 4-player game that can also be played in partnerships. If you are wondering how to play seep, then follow through the article and learn the game and its rules.

Sweep or seep is a fishing game that is played with a pack of 52 cards without any joker. 2 or 4 players can play it but the recent version of this game is available in the two-player forms. You can easily play this game with your Facebook friends, family, or your computer. Learn below how to play sweep card game along with scoring well.

Seep card game is usually played by 4 players in partnership of 2 and the partner during the game sits in the opposite direction to one another. The deal and actual playing sequence of the game is counterclockwise. The objective of this game is to capture cards from a layout on the table (floor). If one team accumulates the need of a minimum of 100 points over the other team, then the game is over.

METHOD- the method of how to play sweep card game is- play the cards from one hand and pick it up with another card or a group of cards from the table having captured value equal to the already played card. While playing the seep game, it is possible to create a set of parts in the form of piles (known as houses), and they can be captured as a unit. The cards which are not a part of the house and are present on the floor are known as loose cards. At the end of the game, the value of all the captured cards can be counted. The values of cards in this game are as follows-

Note that only these cards have their scoring value and all the other cards except these are basically worthless. The total value of all the scoring cards in the pack is 100 points. The players in the sheep card game can also score for a sweep when capturing all the cards from the layout and leaving the table empty. Usually, a sweep is worth 50 points, but when it is made in the very first phase, then it covers only 25 points. Also, the sweep made at the last phase has no points.

DEAL AND THE BID

If you are willing to learn ‘how to play seep in playing cards’ it is important to understand the deal and bid.

The first dealer of the game is chosen randomly, and subsequent deals are managed by the members of the team who are currently losing. If the team dealing with the previous hand is behind, and if the difference is also negligible, then the same dealer has to re-deal. If the team dealing with the previous hand is on the winning side, then it gets passed on to the next player on the right which is now on the losing team. After one Baazi, the deal passes to the partner of the player you might get the turn without Baazi. Now the dealer shuffles the cards, and the player on the right side of the dealer cuts them. Then the dealer gives 4 cards to the player (on his right) and places 4 cards face down on the floor.

The player picks the cards, and if possible, they look for ‘bid for a house’ on the basis of available cards (4). The bid in seep card game rules is from 9 to 13, corresponding to the scoring values of each card in his hand. In any case, if the player is not able to make a bid having no card of value bigger than 8 then he shows the card, shuffle, cut, and repeatedly deal until he gets the bid value. Later the bidding player has to deal with three things-

Learn how to play seep card game and its rounds

Once the bid is done, the game resumes in a counter-clockwise direction. There are basically three possible outcomes at this stage-

Houses are the piles of multiple cards on the floor that can be used to capture units. The smallest house has the capture value 9 and the largest house has 13. One player can only create the house if he has equivalent cards of capture value as the cards in his hand. Every house on the floor has at least one owner who is also the player to establish the house until it is broken. The cemented house has 2 owners, and it occurs when it is cemented or added by the opponent of the first owner of the house. 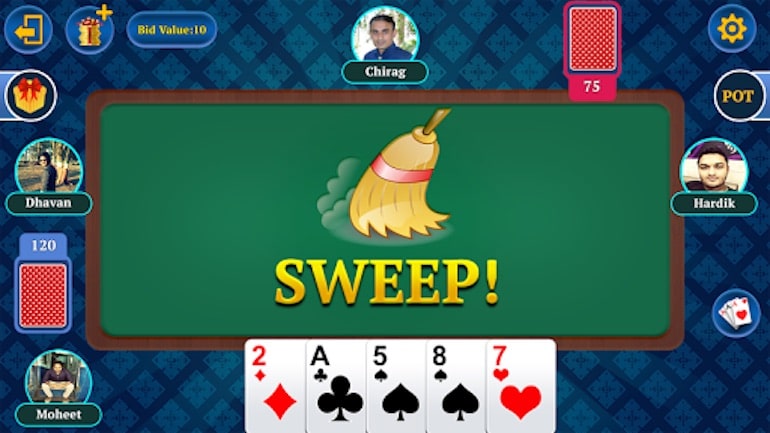 BREAKING A HOUSE- a normal house that belongs to another player can easily be broken by adding a card to increase its value. For this, you must hold a card that matches exactly with the new value.

CEMENTING A HOUSE- you might be wondering how to play seep in cards by converting an ordinary house into a cement house. Go through the rules mentioned below-

The scoring values in card game sweep are quite different from the general values. Every team counts their points for the cards and bonuses from every sweep. The difference among all the succession bids and deals gets accumulated with the total score between the teams. If the winning team has a difference of a hundred points or more, then they can superimpose another team and win the Baazi. If any team scores less than 9, then they lose Baazi.