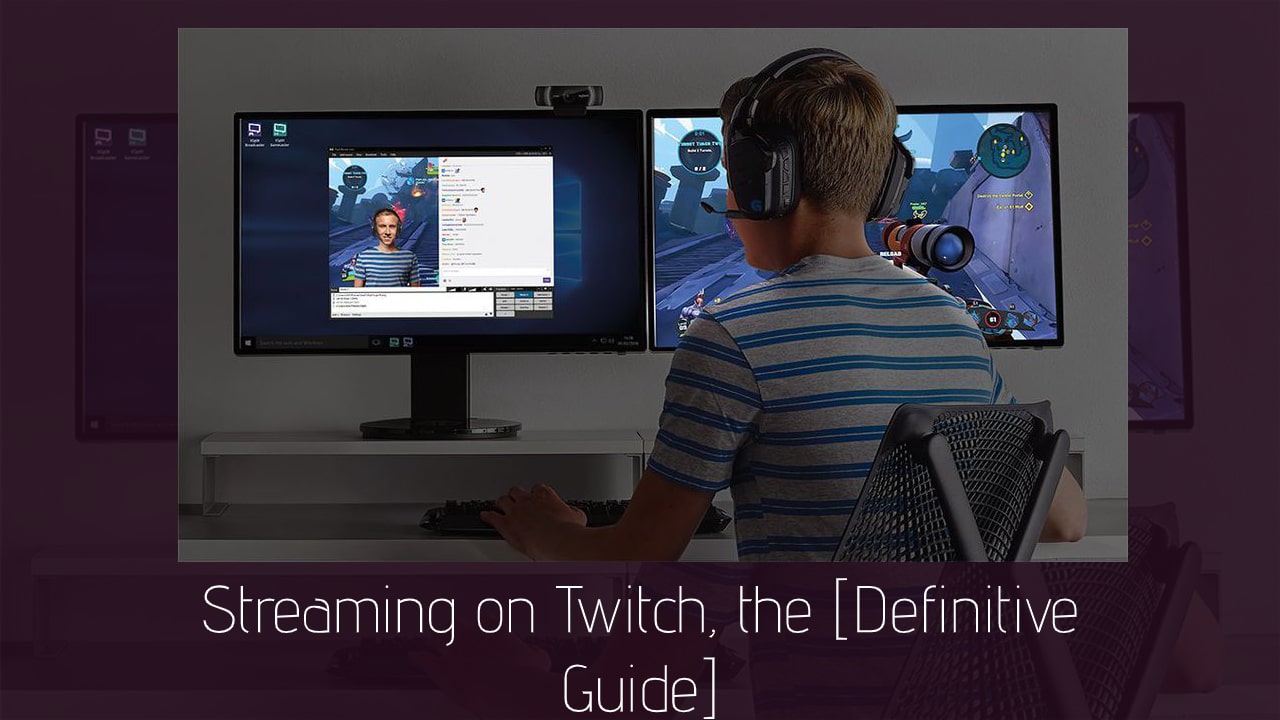 Who wants to sit and watch a multitude of fans playing video games all day long? Millions of people are still there. Twitch has quickly become the largest gaming community, with more than 100 million unique viewers watching major professional tournaments, talk shows, and gameplay sessions, with content offered by more than two million streamers.

The most famous streamers are considered actual Internet celebrities, with legions of fans who dedicate all their admiration during the League of Legends live shows or in the hilarious games of some horror video games. Many famous people supported by sponsors and hundreds of thousands of followers – two more typical traits of a professional gamer who plays video games to make a living.

If your dream is to become a celebrity on Twitch, here’s everything you need to know: from basic hardware requirements to professional advice on how to keep viewers happy.

Although there are various exceptions to the scheme below, most people are streaming from a computer. As for the technical specifications, Twitch recommends having at least one Intel Core i5-4670 processor (or its equivalent AMD), 8GB of RAM, and Windows 7 or later (it is also possible to stream from Mac).

Those who want to stream PC games need a DirectX 10-compatible graphics card – and later – that can support the workload while playing. The recommended connection speed is three megabits per second in upload, which should make it possible to obtain the satisfactory quality for direct broadcasts.

The critical requirements of Twitch are not particularly high, but the game sessions combined with the streaming ones can put your computer in serious difficulty. Many popular streamers use two PCs at the same time – one for playing the game and the other for live streaming through IPTV link.

Getting a Twitch account is a breeze. The service allows you to do it for free and without any commitment. The platform also allows you to select avatars, banners, and customizable descriptions that will be viewed by followers. If you want to make sure that all the transmissions will archive for later viewing, just head to Settings> Channel & Videos> Archive Broadcasts.

Software to carry out direct

Conventional software used by Twitch stars allows you to show your gameplay to the world. The most used are two: Open Broadcasting Software (OBS), completely free, and XSplit, which has a straightforward interface but offers a paid solution to obtain additional features.

Regardless of the choice of software, the live configuration made up of several general dictates: the devices (monitor, game play feed, or webcam), the layout – like the instruments will seen by the listeners – and, finally, the synchronization between Twitch and the chosen program.

The microphone is essential for communicating with your followers. The headset of a headset can be the right choice. Still, if you want to become a real professional, we recommend you invest some money to buy a quality microphone to improve the audio quality of your live calls significantly. The Blue Yeti is the right choice, but if you want to save a bit ‘of money, you can opt for the Samson Meteor Mic. The discriminating factor is your budget.

At the same time, the webcam also plays an essential role for aspiring streamers. If you don’t have one, you can buy a model like the Logitech HD Pro C920, which allows you to record videos with 1080p resolution and a proper viewing angle. Many professional streamers also use a green screen, which will enable you to overlay the image captured by the webcam with the gameplay. However, you can achieve the same result by purchasing a Logitech C922 or the more expensive Razer Stargazer, which offers automatic background removal.

If you have an Xbox One or PS4, you can stream directly from your console, without any extra devices or additional software. On Xbox One, you need to download the Twitch application for free, while on PS4, you can broadcast live through the integrated solution of Sony.

If you are interested in going live on Nintendo Switch or any other console (or if you want to have more control over the transmission), you must purchase a game capture card to record the gameplay from the console to the PC.

Although using a capture card improves broadcast customization, direct console streaming is the most convenient and fastest way to test Twitch’s waters.

How to broadcast live

If you want to find out all the steps to take to transmit on Twitch, you can consult our previous guide.

Usually, Twitch broadcasts are born in their own homes; many celebrities use their home to grow with their supporters and to grow, we don’t mean merely playing recent video games or having an ultra pumped PC. The best streamers in circulation are authentic entertainers; many of them are famous for their incredible headshots in shooters, while others are famous for finishing a title in twenty minutes.

“The best streamers are humble, friendly, very interactive, and treat community members as if they were the stars of their show,” says Twitch public relations director.

If you are looking for a way to improve your audience, the excellent videos of the famous Hearthstone player Jeffrey “Trump” Shih can be a first starting point. According to Shih, there are main components for live streaming called with the acronym “OPTICS” – Opportunity, Presence, Technology, Interaction, Coherence, and Skill (Skill). Print these words in your memory.

To grow on Twitch, it is also necessary to obtain one or more partnerships, which allow you to get a profit and offer exclusive benefits in exchange for a monthly subscription.

How can you stand out among millions of streamers on Twitch? For Burke Black, you need a pirate hat and a lot of patience. After years of study, Black has become a streamer with over 123,000 followers who tune in to follow all his nightly broadcasts.

The pirate outfit, skull bandana, and an epic long beard are the distinctive features of this thirty-six-year-old, who during the live shows manage to make people laugh and chat with enthusiasm while he is engaged in games ranging from Grand Theft Auto V to Pirates! (of course).

“I consider all of this a show and not just a video game broadcast,” explains Black. “People look at me because they love this atmosphere, this friendly environment where everyone can have fun with this playful pirate atmosphere.”

Becoming a pirate is not the only way to become famous on Twitch (spoiler: someone has already thought about it). Maybe you have an unknown skill to show on the platform or a cute dog to be placed in front of the webcam during the matches on Counter-Strike. Find your specialty and show it to everyone without hesitation.

Constancy is a crucial element – many people tune in every evening on theisoftr television program; the same goes for live broadcasts on Twitch. If you decide to broadcast in the afternoon or during the morning, you must allow all your users to know exactly the times in which they go live. Remember to specify your roadmap on the Twitch page and other social channels.

“You can’t get the same viewers if you broadcast at random times, especially when in the early stages of a career on Twitch,” says That’s Cat, a 26-year-old streamer specializing in survival games with more than 48,000 followers.

Sonja “OMGitsfirefoxx” Reid is one of Twitch’s biggest stars, with more than 780,000 members and his merchandise store. Part of his success attributes to his incredible sense of humor and constant interaction with viewers. Still, if he is now in the Olympus of streamers, it is also thanks to the collaboration with other people.

“We started broadcasting Minecraft gameplay daily, with the idea of ​​playing with and interacting with them,” explains Reid about Minute, a series in which she and other famous twitches transmit daily doses of the renowned crafting game. “The project has exploded and has become a big series, which is now preparing advances the third season.”

That’s Cat also made a name for it by playing with other streamers. Not surprisingly, her channel had 500 followers even before going live, simply because she made a lot of friends before starting her career.

“I ended my first life with 80 viewers thanks to my presence in the community before streaming,” says Cat, who got a partnership just three months after the first live.

What sets Twitch apart from other forms of entertainment is that the audience is almost always a vital part of the experience. All broadcasts are accompanied by a chat room, which allows streamers to interact directly with viewers. The more you can make viewers feel as if they are sitting comfortably on the sofa, the more chance you have of building a robust community.

For example, Reid calls his community “Foxx family.” Even with hundreds of thousands of followers, she likes to keep things “personal.”

“I know most of my viewers, remember what happens in their private life, and talk about it with them during the broadcasts. Having a community that looks like a family is very important to me,” says Reid

Interaction is the priority for BurkeBlack, which has a dedicated monitor to observe everything that happens in chats. Black also makes frequent giveaways, which, according to the streamer, help encourage fans to return every night.

That Cat’s followers are so loyal that they allow her to have viewers regardless of the game’s popularity. “I could literally play Barbie’s dollhouse and still have my entire community cheer on me,” says Cat.

Just because your favorite streamer has a super webcam, a green screen, and two high-end PCs doesn’t mean you have to have the same setup – at least in the early days. Twitch’s requirements are relatively lax; this means that initially, you can focus on growing your audience and then transforming your room into a recording studio.

“I started broadcasting with an old HP notebook that was overheating to the point of burning my hands and an old folding chair bought in a supermarket,” explains Reid, who was able to improve her setup significantly as the channel always became bigger.

Be patient and enjoy

To “make it” on Twitch, it takes a lot of patience and hard work, as in all fields. “Usually those who want to stream on Twitch just for the money runs out in about three months.  In the first six months, I was terrible, because I didn’t know what I was doing. Try not to get discouraged, because they all went through it,” explains BurkeBlack.

Now Black’s patience is paying him back, with a community that has recently surpassed 123,000 followers and a Twitter feed full of photos of loyal fans who wear the shirt with his name written on it. Black, who currently works in the photographic industry, is considering becoming a full-time streamer.

Reid instead stressed the importance of appreciating every spectator, regardless of limited quantity initial stages career. “Even if you have 3 spectators, 30 or 300, all of these people have chosen to watch you.”

To conclude, it is very important to remember that we are talking about playing video games. Whether it’s a hobby or something that will hopefully become a career, streaming should be fun – the more you enjoy it, the more fun those watching you will have.