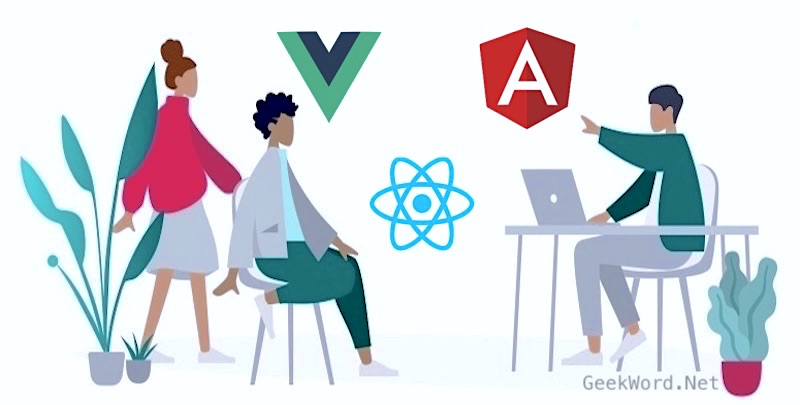 Front-end frameworks are getting popular these days because they permit companies and people to create demanding applications in less time. These different technologies have transformed the industry of web development. With Angular development, there have been various changes in the development field.

Here in this blog, we will cover different elements of Vue, Angular, and React to see which is best suitable for your business needs? This blog is a guide to provide a structure of the JavaScript frameworks in common. Today, we will differentiate among three famous front-end technologies- Angular, React, and Vue.

Differentiation Among Angular, Vue, and React

Overview of React, Angular, and Vue

These three famous frameworks permit all developers to create modern and difficult web user interfaces. Have a look at this-

This framework is an open-source library of Javascript that is created in 2013 by Facebook, and it used this framework internally. It is also used by large scale organizations such as Twitter, Facebook, Microsoft, Instagram, Whatsapp, Asana, Slack, Airbnb, and so on.

It was built in 2010 by Google, and it is known as a Javascript framework based on a typescript. Google launched Angular2 in 2016 that provides a substantial shift that is used by businesses like weather.com and the Guardian.

There always has been a debate about Vue vs React 2021, but it is the youngest among all the three frameworks. It was created in 2014 by Google’s ex-employee Evan, and it has gain popularity in the last few years. Although it is not as famous as React still, it is applied by various large enterprises such as Gitlab and 9Gag, etc.

It is significant to note that no framework is best as everything has its advantages and disadvantages. While deciding the best framework for your business, you must consider various factors. Here they are-

In the debate of React vs Angular, Angular vs Vue, or React vs Vue, these theories are always helpful. Check out these-

It provides a lightweight library to offer aspects to the DOM and also efficiently handle them. The basic functionality of React is creating elements and sub-elements that can be referred to as UI pieces on a web app. It gives you a lot of tools to help you define better how you want elements to be rendered. Also, it provides third-party packages such as a dynamic, Reacts router, client-sized routing library for creating SPAs to render without browser reload.

It is a middle framework between React and Angular. It provides much more tools than React, but less than Angular. Also, it offers routers and built-in state management. Although it doesn’t include form validation and HTTP client functionality. Virtual DOM is used in Vue for bug-free and faster performance. It also concentrates on creating user interfaces and building reusable elements.

It provides most of the functionality of all the three frameworks. Also, it permits you for user interface control, validating forms, handling user input, state management, routing, PWA capabilities, testing, and so on. In Angular vs React, it concentrates upon offering tool’s full collection to use. It also has an official CLI to handle the Angular projects easily and adding deploy and dependencies to it.

Angular- 4+, based upon the created bundle size

However, there is a slight difference among all the framework’s sizes, but they are small in comparison to a normal webpage size that is about 2MB. If you use a famous CDN to boot the libraries, there are chances that these libraries are loaded already in the local system of the user.

You may also Read:- Go vs Rust

Components Comparison between of Vue vs React vs Angular

These components have been an integral segment of all the three frameworks, be it any framework, React, Angular or Vue. Generally, a component has an input and also changes its behaviour accordingly. Also, the component’s use makes the reuse of code easier. Have a look here-

It mixes up the UI and the behaviour of its component. For example, the code for building a ‘hello world’ component will also be responsible for making a UI component and its behaviour’s dictation.

In Angular development, components are also known as directives. These are only markers on the elements of DOM that can be tracked by Angular and also can attach particular behaviour. Hence, Angular divides the component’s UI part as HTML’s attributes, tags, and their behaviour too in the form of Javascript code.

In Vue, UI and its behaviour are a segment of components that make things more inherent. It is highly personalized that permits you to mix up the UI and component’s behaviour that is within a script. Additionally, Vue also allows for pre-processors, unlike CSS, that is beneficial. It is good when it comes to integration, including other libraries such as Bootstrap.

Here is the learning curve of different frameworks-

It offers a guide that is helpful for one set up React in almost one hour. It has solutions to general issues that are already available on Stack overflow with the complete documentation. It is not counted as a complete framework, including rich features, need the third-party libraries to use. It makes the core framework’s learning curve not so sheer but based on the way you take it with extra functionalities. Although learning how to use React doesn’t essentially mean that you are only using appropriate practices.

When we look at React vs Angular 2021, Angular has a sharp learning curve that can be considered as an entire solution. This mastering Angular needs you to learn integrated concepts such as MVC and TypeScript. However, it takes time to learn this framework; the investment reimburses dividends to understand the front-end works.

It provides a high ability to personalized and therefore, it is easier to learn it, except React or Angular. Additionally, it has an overlap with React and Angular regarding their functionality like component’s use. Therefore, the Vue’s transition from these two will be an easy option. Although flexibility and simplicity of Vue are like a sword with double-edges. Also, it permits poor code to make the test and debug complex.

React vs Angular vs Vue: Which One is Better?

It is difficult to answer this debate, as there is no absolute choice. Each of these frameworks and their libraries has its advantages and benefits. Depending on the project you are working upon and its needs, you can select among these frameworks, which is more suitable. It is always good to do your research and analysis, before choosing any of them, specifically, if you are working on a venture rather than a personal project.

These all the three frameworks are good at their place, and it completely depends on you what are your business needs. Every framework’s usage is based upon in which way you want to use these front-end technologies.

In this blog, you are provided with a good overview of the three most important front-end technologies- React, Angular, and Vue. Although learning these technologies is not at all an easy task. So, it was time to go in-depth and find out which of them is more good and suitable. To choose the best among them, it will be good to take a look at your projects, required source code, and requirements, and then select accordingly.

There are many leading React development company that provides appropriate solutions for this useful framework. Our knowledgeable and rich-experienced team members try hard to provide premium quality services to valuable clients. We believe that it is significant to use every framework once before giving your commitment to only one framework. It is necessary to determine which one is more suitable for your business needs. If you want any assistance further, we will be happy to guide you. Contact us anytime.