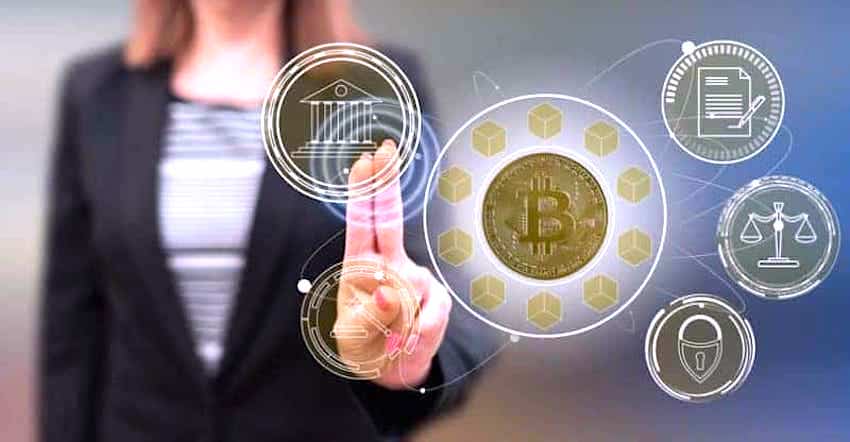 The battle of cryptocurrency legalisation is still on since the bitcoin’s success stories started spreading on the internet. BTC (Bitcoin) may have been the first-ever successful cryptocurrency, but soon many people started following this including Litecoin (TCC), Ethereum (ETH), Ripple, Dash, and many more. In the current time, there are so many cryptocurrencies that it is hard to find which one is legal and which is not?

There have been many bitcoin-friendly countries in 2020, but some of them are non-friendly too. When it comes to bitcoin, we often refer to it as cryptocurrency, that is known as a digital currency used for doing digital transactions and making sure the safety of such transactions. The issue with these cryptocurrencies is they don’t have a regulatory system. Even, the crypto tokens are not regulated. It is the reason why there is complexity in legalising cryptocurrencies by the government.

The first appearance by bitcoin was made in 2009 and had its great momentum in 2017. The bitcoin value has got hiked madly after media persons have been buzzing with cryptocurrency and bitcoin news. Growth in bitcoin has boosted government fears as many countries have put bans on these bitcoins trading because they don’t have any knowledge about it and some central banks have also cautioned from bitcoin. But, here the main question is whether Bitcoin is legal or not? As there are some bitcoin-friendly countries too.

Some of the Legal Uses of Bitcoin

To know the real fact about bitcoin legalisation, we have to go through some details that include these below-mentioned legal uses too. Have a look-

With bitcoin, customers can buy goods and services through online retailers directly. So many companies and online businesses worldwide are accepting cryptocurrency these days.

Bitcoin (BTC) provides the ability for everyone to send money securely to anyone around the world. All the transaction fees are not large and go fast usually. Further, for being a decentralised cryptocurrency along with no central authority dispassion from any of the government, it permits you to have your money and share it with anyone and any time freely.

Many online websites have a donation button at footer that displays the crypto addresses to have donations. People who liked the website’s content can donate coins as per their will to their favourite content makers to encourage them to make more content like that and to feel good that they are contributing something.

Places that are included in bitcoin legal countries list 2020 may enjoy the idea of owning their money genuinely, the ideology for crypto, protecting their privacy, or making money by trading.

Why is Bitcoin Illegal in Some of the Countries?

Although, each transaction online is stored in Blockchain and users may remain anonymous virtually as these records include only transferred money’s amount and public keys. It leads the government to consider various factors around the world when it is about to regulate cryptocurrency. Here are the points- 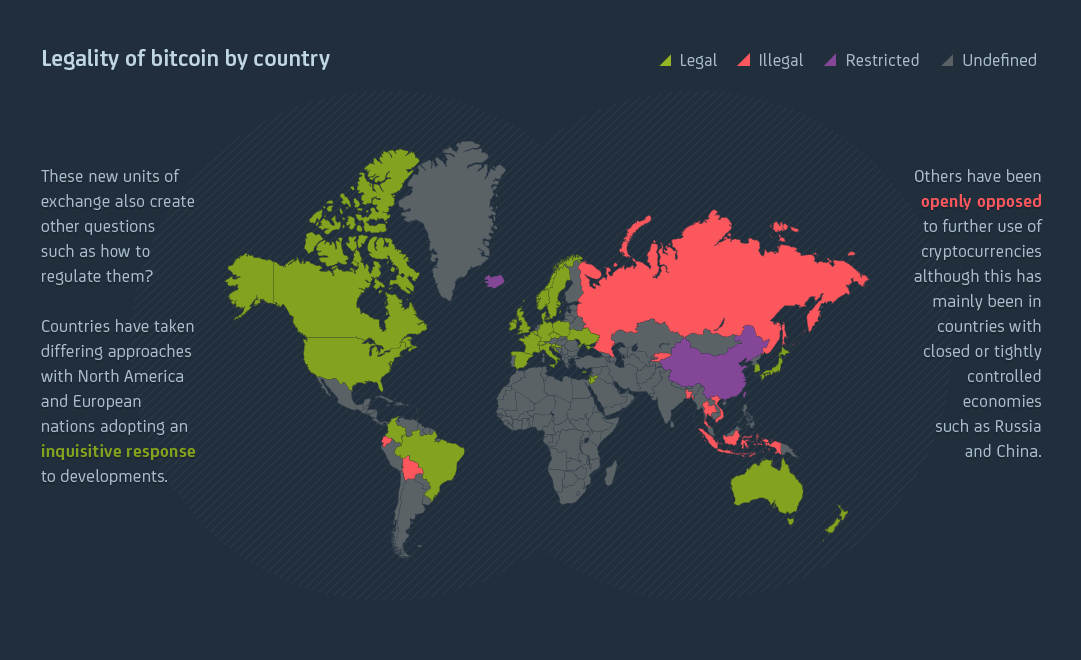 Countries Where Cryptocurrency is Legal & Illegal in 2020

While various countries have shown their positive attitude and interest towards Bitcoin, there are some countries too where the trading and use of bitcoin/cryptocurrency are illegal. Here, we have come up with the list of countries including legalisation and non-legalisation of bitcoin.

The US treasury has divided cryptocurrencies and its exchanges as financial institutions or money services despite tagging it a currency. It refers to how they accomplish the needs of legal operations such as AML and KYC laws. Further, also for record-keeping and being on the top of reporting. On the other hand, internal revenue service has promoted cryptocurrencies and bitcoin as a digital asset that means it is taxable.

This country is also included in cryptocurrency legal countries list 2020. Here, Bitcoin (BTC) is known as a good thing and earned money with its activities is taxable as well. Although the Australian central Banks have stated that additional regulations for bitcoins are not required for using it as a method of payment.

Cryptocurrency and bitcoin activities are legal in this country, but here also it is taxable. It is involved actively in blockchain solutions development, and it has also permitted the citizens to trade and transact in this coin.

The Federal tax service of Russia announced bitcoins as legal in November 2016. Also, people are allowed to buy, trade, or sale at their own risk in these virtual currencies.

It was the first country who had any legislation for bitcoin. In 2014, it passed a law that considered cryptocurrency trading as money services that bring them into working with AML and KYC laws. Despite that, the Canada Revenue Agency announced that Bitcoin is now a commodity and also said its income from cryptocurrency businesses that make it taxable.

It has been at the forefront of all the countries where bitcoin is legal. Japan has also passed a bill in 2017 that permits cryptocurrency exchanges under AML and KYC laws. Additionally, the FSA also has an eye on these exchanges.

This country has a truthful situation about bitcoin as it is very friendly to the crypto industry. It has no laws to cover bitcoin and the prime minister of Malta also shows the warm welcome of bitcoin and the tech abilities of Blockchain. Additionally, he also had a method to promote Blockchain and bitcoin.

Apart from the mentioned above, below are the lists of the countries that support (or do not support) Bitcoin/cryptocurrencies.

Bitcoin is legal in the following countries

This country has banned any currency that is not regulated by the government. The central bank that is ‘EI Banco Central de Bolivia’ had stated particularly about bitcoin and this ban is extended to all the cryptocurrencies and comes under criminal activities.

It is not counted as one of the bitcoin-friendly countries and had banned the cryptocurrencies in April 2018. No bank will get involved in this if there is a dispute.

Vietnam has legalised the purchase and trading of cryptocurrency, but the government does not regulate it. Developing any new cryptocurrency or launching ICOs is legal completely and also, the cryptocurrency trading at famous exchanges. As per its government, it is not a legal method of investment.

The country government banned cryptocurrencies and bitcoins in 2014 because of the development and establishment of a new electronic cash system. This system was going to be linked with local currency directly and operated by the state.

Apart from the above list, there are following also countries have declared Bitcoin as illegal

Countries Where Bitcoin is Used but Not Regulated By Government

The central bank of India has banned all the financial institutions in early 2018 that were regulated by RBI. Also, they banned RBI working with cryptocurrency relevant activities and cryptocurrency exchanges. However, there is no law against the people who are using cryptocurrencies.

In the UK, the FCA (Financial Conduct Authority) had explained bitcoin as a commodity service. Although it doesn’t have any plans for crypto regulations.

This country has also announced bitcoins as a virtual commodity. However, it also doesn’t have any plan to regulate it. The existing laws also don’t regulate these digital currencies directly, but it offers sanctions for unlawful activities, including currencies, like money laundering and fraud.

There are so many countries worldwide that have started adopting cryptocurrency for different purposes. Some of the points, as mentioned above, include bitcoin-friendly countries and non-friendly as well. Also, the cryptocurrency legalisation doesn’t essentially refer to the specific country’s government that promotes or supports the digital currencies in any way.

In this blog, we have mentioned the countries who have declared the cryptocurrency or bitcoin as legal or illegal. Also, there are thousands of reasons why countries are legalising bitcoin as if you are using this for the right purpose; you don’t have to worry about the legalisation. We can say that bitcoin will continue to develop along with blockchain technology.

Blockchain development software for securing transactions on the network. Skilled and rich-experienced team members also try to develop solutions that can help to accomplish different purposes. While cryptocurrency is welcomed in various countries, there are still some of the countries where it is illegal due to its decentralised nature and volatility. Although the legal status of Bitcoin in the emerging markets is still diverse dramatically.