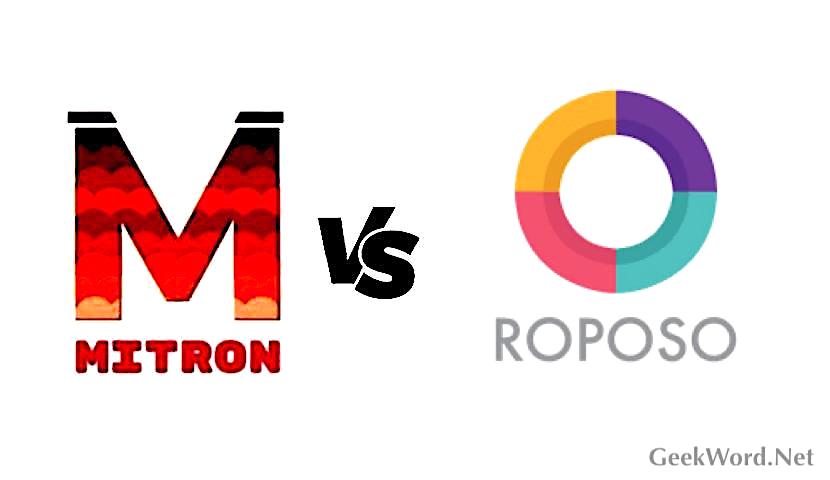 A lot of trouble has been brewing between India and China for the past few weeks. Indians have been motivated to stop using Chinese products. Adding to this, the Indian Government has initiated the “Vocal For Local” program. The Government has banned 59 Chinese apps, including TikTok. TikTok had 190 million Indian users. Mitron, Roposo, Chingari, Bolo Indya, etc. are some of the alternatives available for TikTok. Here we will see the Mitron vs Roposo comparison.

Mitron is an India-made app, which was launched in April. It was founded by Shivank Agarwal (an IIT Roorkee alumni) and Anish Khandelwal. The app was developed by a group of 5 people in Bengaluru. The initial template of the app was purchased from Envato. This app is available on Google Play Store as well as on Apple’s Play Store.

Shivank Agarwal, the CEO of Mitron said, “Our focus is on building features and supporting content that resonates with the Indian users while prioritizing the community standards and local laws of India”.

Anish Khandelwal, CTO of Mitron added, “Our platform is now completely scalable and autonomous and that is helping us to cater to the sharp rise in the traffic and engagement on the Mitron app”.

Developers are working to add some exciting new features to it.

On Google’s Play Store, search for the Mitron app, and install and open it. You can view content on it without creating your account. To upload videos on the app, click on the profile, and use your email ID to create your account. After registering yourself, you can upload short videos on it. Go through the different features that are available to enhance your video.

Roposo is a Gurugram-based Indian app which can be used as an alternative to the Beijing-based app TikTok. This app has a unique user interface. It is a joint venture of three IIT Delhi alumni, Mayank Bhangadia (CEO), Avinash Saxena, and Kaushal Shubham, and was launched on 10 June 2020. Though it was founded in 2013 and was initially released in 2014. This app is owned by Glance InMobi Pvt. Ltd. It can be operated on Android as well as iOS. It is a social media app that offers video-sharing as well as instant messaging facilities.

The CEO said, “We are ethical and clean. If you only see the clean and good stuff, you will be forced to post videos in that domain. Our priority is to make the platform clean and we do that by creating a lot of channels and not forcing the creator to go in one direction”.

The Comparision Between Mitron And Roposo App

Mitron and Roposo are both Indian apps. I hope that in this article you got an idea of the difference Mitron Vs Roposo offers. Amidst the anti-China sentiment, both these apps are seeing a huge jump in their total number of downloads and viewing hours. Though, both need an update in their features and removal of bugs.

But, the ban on Chinese apps and encouraging Indian apps is a huge step that has been taken by the Indian government under its Vocal for Local initiative. We should abide by it and have patience until developers update these apps to make them better and more exciting. For now, in the battle of Roposo Vs Mitron, Roposo has the upper hand due to its uniqueness and filters. These apps have huge potential in the Indian marketplace.